skip to main | skip to sidebar


Ryan Joyce Charity Magic Show in Cooperation with the Brantford Kinsmen are bringing you the most outstanding magic of the century.

WITNESS SOME OF THE MOST AMAZING MAGIC YOU WILL EVER SEE... LIVE ON STAGE!. 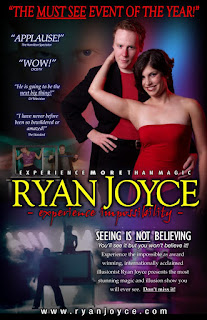 Be prepared to experience some of the most outstanding magic of the century. The Ryan Joyce Show is an unbelievable grand scale illusion show that features fast paced, high energy modern magic and spectacular illusions.
Ryan and his crew provide the very best grand scale magical entertainment in the country. Their unparalled experience presenting sold out standing room only theatre shows.
Ryan Joyce is one of the most highly regarded magical entertainer in Canada today.

He presents one of the countries largest and most spectacular grand illusion shows. Hundreds of thousands of astonished spectators travel to packed theatres and auditoriums in over 80 cities nationwide. Ryan is a highly skilled International Award Winning Magician and Showman who successfully uses his charming style to capture the hearts and minds of every member of his audience.
In addition to his demanding touring schedule Ryan provides dynamic, high energy entertainments. His performances have raised over a half a million dollars for charities across the country.

One of Ryan's long list of outstanding accomplishments includes a World Premiere Performance along side the Hamilton Philharmonic Orchestra. The Magic of Music was a performance so uniquely creative that it brought the audience of 2,000 leaping to their feet.
He's going to be the world's next big thing.

If you like more information on Ryan Joyce Charity Magic Show.
We would be happy to answer your questions,Call:(519)754-0169
Or Visit our Website at:
http://www.brantfordkinsmen.ca/magicshow.html
Posted by Kinsmen Club of Brantford Inc. at 7:13 PM

Kinsmen Club of Brantford Inc.
Brantford, Ontario, Canada
Brantford Kinsmen Incorporated, was chartered on March 11, 1941 and on October 1, 1962 received its' Letters Patent from the Provincial Secretary and Minister of Citizenship of the Province of Ontario.